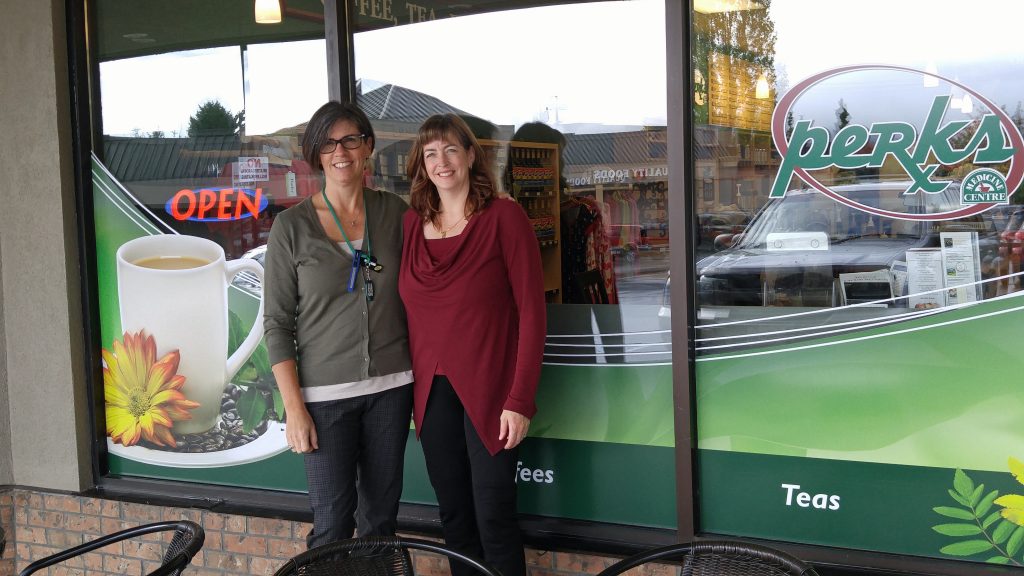 Two best friends had a vision that would combine their pharmaceutical skills with their sense of commitment to the community: open  a pharmacy together. Today the Nanoose Medicine Centre is more than just a pharmacy, it’s a place where local people and visitors to the Red Gap mall in Nanoose can gather, enjoy one another’s company over a coffee and receive expert medical advice, fill prescriptions and even undergo treatments for some minor ailments. It also showcases the works of local artists and artisans, all within a boutique-like shop that exudes warmth and friendliness.

When the management at the Red Gap centre approached them in 2005 to open a pharmacy in the mall they thought it sounded like a great idea. “We’d been friends for a long time and we thought working together sounded like fun, so we did it”, said Tracie Der who, with her husband William, operated the pharmacy on Gabriola Island at the time.  Her partner, Darcy O’Toole and husband Sean, own and operate two other pharmacies in Qualicum Beach, the Qualicum Medicine Centre and the Memorial Compounding Medicine Centre.

They opened up their popular coffee bar, ‘Perks’, in 2012, taking over the space next to the pharmacy that had been vacated by a video store.

“We polled our customers and patients to see what they thought should go into that space”, Tracie explained.  “Most people suggested either a liquor store or a coffee bar, so we went with the latter, thinking it would be a nice complement to our pharmacy”.  It turned out to be a popular gathering place for people in the community, attracting hikers, cyclists, boaters and various others who drop in to chat and greet neighbours.  The owners believe it could be the first pairing of such enterprises in Canada.

“We were accustomed to being part of a tight-knit community on Gabriola and we wanted to replicate that sense of neighbourly bonding and mutual support that seemed to be missing here in Nanoose.  There is a lot more transient activity here, people are not as focused on community as they could be and that’s a sad thing”, Tracie observed.  They also wanted a way to give back to the community and they have done so in a big way.

The two couples have donated to the local Nanoose Community Services organization (NCS) in several ways since they established their businesses here.  They’ve provided seed money to promote the annual Christmas Elf campaign; were a sponsor of the Art in the Garden arts and crafts show, as well as supplying coffee for the two-day event; helped promote a local auto show and rally at Arbutus Meadows that raised money for NCS; and they have established a way for customers to donate the credits from the ‘Perks points’ they have collected to the NCS.  For every $10 purchase customers receive a point and can trade those points in for a cash credit after 40 points have been collected.

“A lot of people like to donate their points back to us so that we can tally it up at year-end and provide a donation to NCS in that amount, plus we match what the community has donated throughout the year”, Tracie explained.

In addition to all that, they tap into a broader Medicine Centre Group parent organization program through which money is raised by pharmacies throughout western Canada then fed back into communities to help neighbourhood support programs. “Our portion of that larger program comes back here to our community”, said Tracie.

“Our businesses provide us with an opportunity to get more involved in our community”, said Tracie who, with husband William, resides in Fairwinds.  “The coffee bar is a very special part of that, providing a place where we can casually discuss clients’ health issues over coffee or tea. I believe we can provide better care that way”.