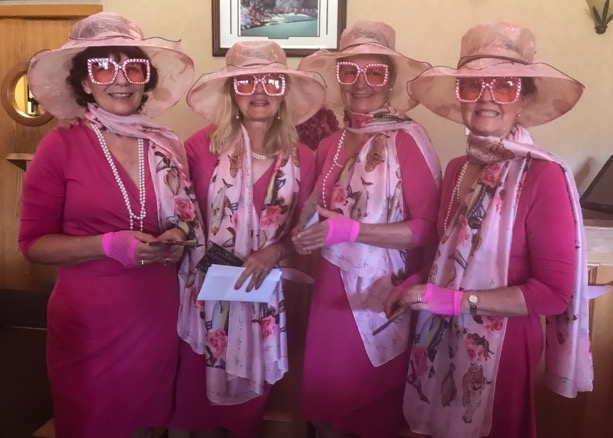 The Nanoose Community Services (NCS) received a big boost on Aug. 9 from the people who participated in the Fairwinds Golf Club Ladies’ Field Day. The event raised $5,155 for the local charity. In addition to the full slate of 128 golfers from across the region, 19 men volunteered to handle bags and act as spotters. Another three ladies kept everyone happy as they circulated with cookies and fruit during play.

‘Par-tee-in-Pink’ was the theme of the day with the foursome of Sharon Adams, Lee Finn, Jackie Higham and Kerstin Fredriksson capturing the prize for the ‘best dressed’ team.

Skill prizes were awarded to the top three teams:

Raffle tickets were sold before the round and according to organizer Fiona Been, local businesses were extremely generous in donating prizes for the event. Prizes, totalling $1,171 included passes to Pheasant Glen, Fairwinds, Nanaimo, Eaglecrest, Arrowsmith and Storey Creek golf courses and two gift certificates. Arts and crafts and other items donated by local artists and other generous neighbours for the raffle and silent auction were valued at approx. $6,800.

“Nobody won the car for getting a hole in one on #10, but it added a lot of excitement”, Fiona noted. Others on the organizing committee were Crystal Ironside and Janet Gibson.

“Many thanks from our team for the work you put into making this event such a success”, said golfer Pam Straka. “There were undoubtedly many people involved along the way and we appreciate how smoothly everything went today, from the teams embracing the pink theme and having fun with their costumes, to the delicious food”.

“I hope that we were able to raise a nice amount of money for NCS”, she added.

The local food and assistance program currently supports over 100 people in the Nanoose area who are unable to provide themselves and (in some cases) their families with food and other daily necessities.

Events such as this provide the much needed infusion of money to keep the program running. It is truly an example of ‘Neighbours Helping Neighbours’.