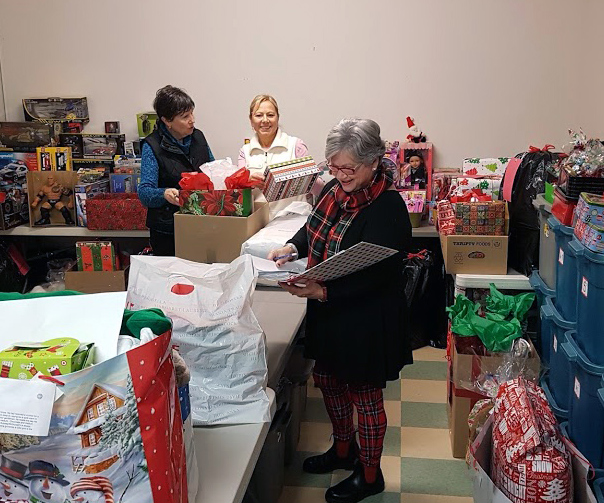 She is not quite ready to hang up her elf ears and slippers, but Maureen Moore is stepping down as Nanoose Community Services’ (NCS) ‘Chief Elf’.  Since 2008, Maureen has been involved in organizing the successful Christmas Elf Program, which now provides gifts and food to over one hundred individuals in our community every year. Last year the program raised over $71,600 in cash and gift donations. Her position will be taken over by one of her experienced helpers, Geraldine Taron.

The program has grown substantially since Maureen first began lending a hand to Ginny Brucker, a teacher at Nanoose bay Elementary School and founder of NCS. Maureen was volunteering in the special education department at the time.

“I was inspired by Ginny’s commitment to the community and her generous heart”, Maureen recalls.  Ginny worked the early Elf program out of an empty classroom over the Christmas period.  Seeing that she could use a hand organizing the toys and gifts for local families Maureen stepped in to help.

“I found that it was such as positive experience that I decided to make it a part of my Christmas giving each year”, she said.

The program really began to take off leading up to Christmas 2010, when then NCS Board Chair, Jay Spence, received a number of donated trees from Canadian Tire. Ginny and Maureen set up the trees and decorated them with ‘Elf hats’ describing the toys and other gifts desired by local families in need.

The two women worked together growing the program until Ginny retired and moved to Nanaimo in 2014, passing the ‘Chief Elf’ hat to Maureen. She says that “hands down” the high point of her work is distribution day, when she gets to pass on the many gifts collected by her team to the recipients.

“The people we help are always overwhelmed by the generosity of the community and so very grateful”, she says.  The Elf workshop found a more permanent home in the fall of 2016 when space was acquired in Nanoose Place.

The Elf trees have become a well recognized and anticipated lead-up to Christmas in our community as donors seek to help out neighbours for whom Christmas is an out-of-reach extravagance. Asked if she will continue to lend a hand to the program, Maureen replied, “Absolutely! I feel it’s time to pass on the reins, but it’s become such a wonderfully satisfying part of my Christmas that I imagine I will have some role in the Elf Program for awhile”.